Ran down to New England Dragway again for my last time this season. AJPTurbo tuned of course. I was able to beat my last best by 3 hundredths of a second. Cut a 1.72 60 ft and ran .40 jet which is a 75 dry shot of nitrous. Fuel is really taxed it is honestly a hair over max. I need the upgraded HPFP ...among ither things. 11.36 on stock fuel pump. Nice! This was my first and best pass out of two. Pushing the car to the max...i data logged the first run and didn't really my air and fuel so added more meth volume for the second run which made everything look much better but I had a 0.2 knock event....very tiny as I went very lean for a second and got an 11.49 with a 1.82 60 ft. Decided to call it. When pushing my car to the max, it gets to a point its not going to run any faster so why keep pushing it?

I didn't get a video of the full run which was very disappointing. I ended up buying the same camera my friend lent me last time, I had everything taken care of...had the camera, friend to film and even my 14 yr old son came to watch. I had them wait in place where we filmed last time, right up close. As I'm coming finally coming up for my turn. A staff member is talking to everyone standing where he was(small croud) and I see him and my son walking towards the fence away from the front and to get out of the fence is to go back towards the road and go around their building. So I'm making hand gestures to him pointing at my eyes then his eyes then the track...trying to say...can you still film me from there? Hes upset saying they told them they can't film there bc they werent wearing a wrist bands...as far as I know only drivers check in and get wrist bands so why would they need a wrist band? So I'm thinking like.,,dude go run around the building so you can film me....and he's thinking I can't film...like I'll film the next one...but it's like...this could be the one..

Very frustrating to get the side view behind the building and see my car go out of sight. Did Dragy again too and that said 11.41 again. My 11.39 was an 11.41 on Dragy too. I'm going to put together the Dragy version with the slip....and my 11.49 was against a mustang that ran an 11.07! Really cool and close race I have that on film and dragy as well as the slip.

Last year my best time for my first ever track appearance was a 12.3. Ending season two with an 11.36? I really can't complain. But somehow I walk away disappointed with the time and that I didn't get it on film of all things.

Yep my friend. It is time for an XDI (for both of us) and a drag radial for you.

That XDI pump is Gold. A must have for next season for sure. Meth has got me this far but this is the end of the road as relying on it for extra fuel pressure. I'll still keep meth for cooling and octane.

Congrats!!! You sure have come quite a bit further than last year for sure! At this rate.. 10’s next year?


Sent from my iPhone using Tapatalk 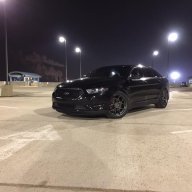 Congrats Andrew on the new pb! And improving the fastest 10-12 category!

StealBlueSho said:
Congrats!!! You sure have come quite a bit further than last year for sure! At this rate.. 10’s next year?


Sent from my iPhone using Tapatalk
Click to expand...

Wishful thinking. It would be nice but it cost a lot of money to do what I did this year. Its a lot harder to touch up on a low 11 than a low 12. Everything needs to be spot on...anything not quite 100% would need to be 100% and all the prep done and ready without any driver error. ....no pressure lol! I'm definitely a wild card as the driver bc my 60ft is all over the place. This year it ranged from a 1.72 to 2.01. Yikes! Ha

Jordan_R said:
Congrats Andrew on the new pb! And improving the fastest 10-12 category!
Click to expand...

Thanks buddy! And hat off to you, you make it look easy and it is not...not at all.

Here's the video footage and of course in cinematic style
You must log in or register to reply here.