Ok. I really really want to like this car. But I am running into issues and it’s about to cross my line of money invested to be not worth my time or anymore money. Here are the details.

Mechanic friend passes away. Mechanic son basically gives me the car for $500. Terrible pearl red paint job is burning off, body isn’t too bad, needs a bumper assembly (reinforcement broke/cover warped/fog broke/wiring janky) wouldn’t be a big deal. But there are zero in the yards so far. I’m on alert now, I used to see sho’s all the time now it’s just the 96+ interior is black and pretty good. Dash is trash cracked.

Probably injectors? How bad to pull and what about gaskets and o rings sources?

77k I read something about a valve adjustment needed at 60k?

Went to move the shifter and the “underneath” cable bushing just broke.
Source?

Went to roll t to e driver window back up. It’s barely worked and now does not. Sounds like cable driven ****.
Source?

Anything I should do before I really crank it up, it’s been spun over a bit now and should have oil everywhere.

I’ve removed the terrible chrome wheels and installed 2012 focus 16” steelies and p71 caps. Also almost have all of the tint off. Haven’t been able to wash it yet.

I added the 2012 Focus steelies/tires $60 and p71 center caps $30 and almost have all the twenty year old purple tint off. 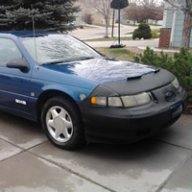 It sounds like your injectors are clogged, which is common on vehicles that have sat for a while. When you pull the plugs after cranking, are they wet or dry? I'm betting they are dry based on your description, which means fuel is not getting through the injectors. While it is possible that the pcm is not telling the injectors to fire, it is far more likely that the injectors are plugged up and stuck shut.
L

Almost free cars are that way for a reason. What's your pain tolerance? I had a '90 as my 1st SHO back in 96 or 97, and that thing was a love/hate vehicle. I learned how to work on cars from all the things that needed fixing alot of the time. Do you have a line in the sand for this vehicle? If you are close to it I would take the loss and bail on it. IF you don't mind a project that's fine. THe 1990 cars have only 5 digit odometer I think, so you may be looking at 177k, the body looks rusted and the interior is beat up. Give it a good thinking about what you think is reasonable to get this going.

Try SHOSource.com or SHOnutperformance.com for stuff like shifter parts. That bushing might be what Josh at SHOnut offers. THose SHO specific businesses are tiny side businesses for working people who have a history with these cars.

Injectors like to stick closed after sitting for a long period of time. Shosource sells cable shifter repair parts I believe. Window motor bushings likely disintegrated, you can replace the whole motor or take it apart and replace the bushings, lots of videos and posts about Ford window motors from the era needing these. Valves are not likely out of adjustment, if so not much, especially if it only has 77k vs 177 or 277k. I would check them if it needs the valve covers removed for gaskets or similar, but I wouldn't sweat it too much yet if you haven't gotten the car running.
S

Well I got the damn thing running and driving. Pretty quick.
L

sleepercoupe said:
Well I got the damn thing running and driving. Pretty quick.
Click to expand...

Great news. What was the definite issue keeping it from running?

They were very fun. Especially back in late 80s early 90s. Most cars were so much slower back then. It was nice to rip past people with a boring Taurus.
S

luigisho said:
Great news. What was the definite issue keeping it from running?

They were very fun. Especially back in late 80s early 90s. Most cars were so much slower back then. It was nice to rip past people with a boring Taurus.
Click to expand...

Well, the gas tank/pump and then with the injectors just removing and jamming a nozzle or carb cleaner in there while a hit them with 12v on the bench. Slapped it back together and it started to relearn. Then threw a map sensor on, now a cel after 1.5 miles of driving haven’t pulled the code yet. It it runs like it has 77k so I’ll drop a couple more bucks at the ol rockauto restoration shop.
L

You got the fuel filter also? Easy outside the tank change.
S

luigisho said:
You got the fuel filter also? Easy outside the tank change.
Click to expand...

I did. Know exaggeration the fuel that came “out” was like molasses. Ethanol does not age like pure gasoline.

drove today to work about 20 miles. Pretty smooth other than suspension groans. Tach is intermittent.

Headlights are DIM even with new bulbs. Just a crappy design?
L

sleepercoupe said:
I did. Know exaggeration the fuel that came “out” was like molasses. Ethanol does not age like pure gasoline.

drove today to work about 20 miles. Pretty smooth other than suspension groans. Tach is intermittent.

Headlights are DIM even with new bulbs. Just a crappy design?
Click to expand...

HEadlights are crappy design and the lenses are prone to plastic degradation like all plastic lenses. Some polishing might help. The fogs can help brighten the streetlevel light if you so choose.

Ethanol is the devil. Killed every cheap chinese carb on every lawnmower I've owned in last 15 years. That why I asked about the filter. as long as it is normal responsive to throttle you are in good shape. I am sure the suspension is old and the rubber probably dried out. You can swap that in pieces and it's not much different than any other vehicle of that age.

Just make sure you measure the sway bar thickness with a caliper. Ford had a tendency to throw in a different size or two depending on year and what's in the inventory at the plant at the time. I think sway bar bushings ( in the middle of the swaybar) might have different sizes of openings for different bar thickness.

Like these are good for 25 & 26mm rear bar to car body mount (not endorsing this brand. not sure if it is good or cheap a$$ stuff) but size and shape are correct

www.autohausaz.com
Last edited: Nov 23, 2022
You must log in or register to reply here.

New EVAP hoses, but how does it all go?