Leaking PTU - How to fix?

Alright folks, reaching out to hopefully get some input on how to proceed.

Vehicle is a 2014 Taurus SHO, non-PP. It was manufactured 11/13. It currently is sitting at 152k miles. I bought it used with about 50k miles on it. I use it as a commuter vehicle. My round-trip commute is right at 100 miles/day. 90 of those miles are interstate so it doesn’t see a lot of abuse. I do like to open the throttle once in a while, but it’s usually to pass someone. I do not flog on it from a stand still pretty much ever. Overall, I’d say the car has a pretty easy life.

I did not know about the whole PTU issue with these cars. Subsequently, I have never had the PTU oil changed or really anything with the drivetrain. I replaced the driver’s rear wheel bearing maybe 18 months ago due to growling. Other than that, the car has been uber-reliable.

Over the winter, I started noticing the smell of burnt oil after I parked in the garage. I then noticed some drops of oil on the driveway. Being it was crappy winter weather, there wasn’t much to do. At my next oil change, I asked the pit tech to see what he could see. He said it looked like it was coming from the PTU.

The car has also developed a growl, very similar to the wheel bearing I replaced. I didn’t get a good chance to check it this weekend but I plan to do it tonight. It could be two separate issues, but it is putting some pressure of urgency on me.

The weather finally warmed up and so this weekend I took a look. It appears that the oil is coming from the TOP of the PTU vent hose. It looks like maybe it’s puking out the top – is that indicative of anything in particular? It already has the vent hose listed in the TSB. The hose was attached when I checked it this weekend.

Given the miles on the car and my unbeknownst neglect, I wanted to get a plan together for how to take care of this. That’s where I need your guys’ help.

My PTU does not have the drain plug – only the fill plug. So, first question – should I plan on doing a drill and tap to facilitate this whole process?

Second question – given the miles, I’m guessing it’s a safe bet that the PTU has plenty of sludge in it. What’s the best way to get it out? I have another car I can drive, so I can do whatever. I was wondering about maybe putting some engine flush in it then taking it around the block? Keep doing that until I stop getting sludge out?

Is this all a waste of time? Should I just plan on getting another PTU? There are no drivability problems to mention. If the growl turns out to be a wheel bearing, then it’s not even making any noise. Is it possible that this situation can be salvaged?

I think it’s on its way out from about 100k miles of use from the same fluid. You could use a pneumatic vacuum with a hose and try to suck what you can if there’s anything even left in it and fill it back up with some new gear oil which as long as it’s on a level surface you just need to see fluid coming back out of the fill and let it dribble until it stops then put the plug back in. You could also just pump and pump and pump new fluid in, overfilling it on purpose to try to clean some of that gunk out….finished when it stops dribbling out. That could buy you some time until you can get a new one in. Or see if that noise goes away. That’s what I would do before wasting time tapping it if it’s toast but also to see if that noise goes away or to ensure it’s not coming from the PTU. Then moving forward I would change the fluid (if you don’t replace it) with every oil change for the next 15k miles basically flushing it constantly then after that maybe it’s good to wait 10k miles or once a year. Not sure how many miles you want to put on it. If considering getting something newer in the next few years it’s worth it to see if new fluid magically salvages it

It is done. It is giving you all of the warning signs. 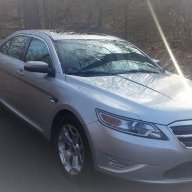 See the other threads related to the PTU. There's a lot! I wouldn't say it's done ... yet. To share what I just posted on one, I just had my PTU (2011 SHO, 105K miles, no previous PTU maintenance) tapped and fitted with a drain (see other threads about PTUs for the source!) My mechanic called me concerned when nothing drained out, and then stuck a screwdriver through the hole and it came out with sludge. He ran a transfluid flush through it for three hours until it was clean. There were no smells or any indication of a problem -- just a late precaution on my part to finally get it tapped, flushed, and filled. From here on out, it will get flushed and filled every 30K. As the saying goes, your mileage may vary.
You must log in or register to reply here.

M
PTU Replacement How To..