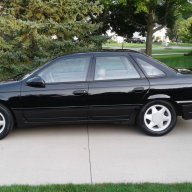 I bought a brace from Jose and plan to install it on my SHO this weekend.

A few mths back hit a huge tire tread and it tore my shifter off ( have new shifter too) and broke the boss clean off.

Only good news is the tranny is still fine and only the upper portion of the boss is broken.

How much does one have to grind to get the boss to fit ... thats one question.

Secondly .... Jose sent me a bigger bolt that I assume goes into the boss. Its a 12 mm bolt that he told me to thread into the plate .... I believe he wanted me to press the bolt thats on the rod shifter and put the new bolt in its place. Thats where I get confused ....Can you press that rod shifter stablizer bolt out ? Do you want to ?

Any input would be of help

it was easier than I thought. The boss fit right into place and with the tranny boss partially destroyed the amount of alum. i had to remove to get the boss to fit was minimal.
You must log in or register to reply here.

W
Anyone ever install a sho steering wheel into and FPIS?

N
New to the car scene need some help.