Been a SHO enthusiast for many years. First SHO was a used '89 with 105,000 miles on it - now has about 190,000. Liked it so well I bought a used '93, 5 speed, with about 40,000 miles on it - now has about 90,000. Later bought a '95, 5 speed, with a sun roof. It had squirrely handling and finally identified a problem with the right rear suspension. Fixed it and ended up selling that one. The '89 and '93 have been in storage for several years, but are now out for needed repairs and probable sale. While taking the '89 to storage the shift lever went limp - I assume the plastic coupler broke - still a cable shift. The headliner is shot and the leather driver's seat needs repair. The '93 runs hot - have replaced the radiator and water pump, and the heater core leaks. In the process of replacing the heater core, and will try to find the over heating problem. I do my own *** on the cars, including the valve adjustments. These are great road cars.
Was a long time member of the original SHO Registry. Came to this site for help with the heater core replacement. Have the Ford Shop manual for each car, but it doesn't get into enough detail for the heater replacement. The '89 manual talks about disconnecting the A/C, but the '93 manual doesn't. Got the dash off, and the three firewall nuts off, but without disconnecting the A/C lines it doesn't move much. Forum gave me the info I need to proceed. Thanks. 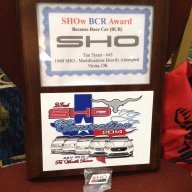