Took delivery of the engine this morning! Kind of excited. Everything that shoblock said is spot on. Cast exhaust manifolds. Plastic valve covers. Otherwise looks identical to my engine. I was really excited to see that they shipped the engine with the turbos attached but quickly noticed that the back turbo (right side) was damaged either in shipping or when taking it out (maybe even when the vehicle wrecked). The outlet up pipe on the compressor side was snapped off, so I'll be sticking with at least one of my turbos. No biggy, but it would have been nice to have a spare set of brand new turbos sitting there ready to swap in should I need them.

I'm debating on which parts exactly to swap from the old motor to the new one (other than the aforementioned cam and crank sensors). I'm pretty sure I want to stick with the header style steel fabricated manifolds that are on the old motor now, because they look like they probably flow better and have better heat dissipation (although probably louder). The valve covers are plastic instead of aluminum, which seems worse at first glance, but I'm wondering if any improvements were made to that design that would make them superior to the old style. For example, there's no separate oil separator on the back head and they look like they have a little more room under them than the aluminum ones. I've heard a lot of complaints about these early builds for oil in the turbo plumbing from the PCV system. Any thoughts on whether the plastic ones would be an improvement here?

This engine also shipped with the oil cooler attached, and I'd like to keep that if possible (I know my current oil filter bracket will bolt right up in its place if I don't use it). Does anyone know what other parts I would need to convert my car to that type of setup? After seeing coked oil chunks built up in the old turbo oil inlet screens and my oil pressure issues, I think these engines should never be optioned without one if you live in a place that regularly gets over 100F in the summer like here. If it's not prohibitively expensive, I definitely want it.
You must be registered for see images attach
S

If you're going to trash that broken turbo I would be interested in it. I always enjoy making little desk sculptures from old auto parts and could make good use of some turbo internals.
R

SilverSH0 said:
If you're going to trash that broken turbo I would be interested in it. I always enjoy making little desk sculptures from old auto parts and could make good use of some turbo internals.
Click to expand...

I may have something for you after all is said and done. I was thinking of trying to frankenstein my old failed turbo housing onto this one if it's still in good enough shape. Still trying to make something out of the fact that they shipped me low mile turbos. We'll see.
R

So I wanted to get moving on this so I just went ahead and ordered all the gaskets I'll need to swap over the valve covers and exhaust manifolds with turbos. That's probably for the best anyway because the plastic covers might raise some alarm bells during the smog visual check here in California. I don't even want them looking twice at it. I've decided to add the oil cooler and ordered parts that came on the non-ecoboost tow package in 2011. I'll update on whether the parts fit. I think even if they don't, it should be easy to modify them to work. It wasn't super expensive for the lower radiator hose off of Rockauto (with the cooler ports) and the cooler hoses with the quick connect fittings off of FordPartsGiant. Regardless, I ordered the two dollar gasket that goes to the non-cooler oil filter adapter just in case the hoses can't be made to fit. By the way, don't order that gasket from the dealer. They want $65!!! for it! I told the parts counter guy how much it was at the regular parts store and he joked the OEM one must be made of gold lol.
S

Just send me a PM on the turbo if you end up scrapping it. I don't want to take parts anyone would use. Just throwing it out there in case it was going into the trash.

I think BPD has added an oil cooler to his early model non-PP SHO. I think he has listed the needed parts. If you still need them you might message him.
R

Hey everybody, I know it's been a while but I wanted to bump the thread to give you all an update on how this went. My wife had the baby and after a week with him we realized he was going to be as easy to deal with as they come, and so we decided that I would do the engine swap myself. After three weeks of intermittent work the engine is in and it's running perfect. Pretty much everything shoblock said was true. The cam and crank sensors were 3 wire vs. my 2 wire sensors and they just bolted up. Not that I was supposed to get any of this with my purchase, but the turbos are a bolt on affair from the 2015 Explorer interceptor to my steel manifolds. The compressor housing from my spent turbo bolted right to the cracked turbo, so this got me the second turbo (instead of just the front one). As he said as well, the poly valve covers would not completely bolt to my old heads (I put them on because I want to salvage what I can of the take out motor, so I'm keeping it clean) due to a missing boss. The cast aluminum covers however just bolted up to the newer heads just fine.

During assembly I was thinking about saving some time and just using the cast exhaust manifolds because the steel ones don't look like they flow any better (and cast is usually quieter), but the rear one was cracked by the collision that cracked the turbo, so I had to use mine instead. One minor detail that's different between the two is that my turbos had brackets that held them in place, but they deleted this with the cast manifolds on the Explorer and there is no place to bolt the brackets on those turbos. There's a big old lever of exhaust tubing and turbo charger hanging from that steel manifold, so I'm planning to weld a bracket to each exhaust pipe and bolt each to a bell housing bolt to keep it from torquing on the manifolds during acceleration.

The oil cooler was a bolt on affair. I used the non-turbo tow package lower radiator hose and it worked fine. One issue was that the hose wasn't designed to clear the turbo-to-intercooler flex pipe, so it was squishing it a little. I fixed this by pulling it toward the cooling fans with a zip tie and it clears the flex pipe fine now. It's an extremely tight fit and very busy in that area now, you literally couldn't squeeze a hand through there anywhere, but it's working just fine so far.

Another few minor details that are different are as follows.
-The MAP sensor is held on with only one bolt instead of two, which I found interesting, considering that the same part number is cast into both intake manifolds and the MAP itself is the same part number and it plugs into my harness. Still bothers me for some reason though .
-The junkyard motor shipped with coil packs, and these were also a no-go. Just like the cam and crank sensors, they are three wires instead of two, so they don't interchange. I'm not sure when they went to these, but in 2015MY they're for sure different than the 2011MY.
-The Interceptor Utility motor I got had an extra heater hose port that protrudes from the front of the motor under the throttle body below where the upper radiator hose attaches. I don't know what it's for, but I'm guessing maybe a PTU cooler or something of that nature due to the HD designation of the interceptor application. In order to delete it completely, it looked like I would have to remove one of the heads to get the coolant tube out, so I just plugged it instead.
-The oil pan looks a bit deeper. I wasn't sure if I was just seeing things, but when I filled it with oil, it took another half quart than my old motor (a full 6 quarts instead of 5.5). I was worried that maybe the dip stick was wrong, so I looked up capacity on the 2015 Explorer and sure enough it's 6 quarts. This is a big plus IMO, and there are zero clearance issues in the Flex.

Now that it's in and running I wanted to say thank you, thank you , thank you for all the help, especially shoblock, and to SHOdded for putting me on to this forum.
S

Probably the most comprehensive comparison so far

Props to shoblock & bamsho of course, but also to your wife & son for letting this project be inhouse
R

SHOdded said:
Probably the most comprehensive comparison so far

Props to shoblock & bamsho of course, but also to your wife & son for letting this project be inhouse
Click to expand...

For sure. She did have a few thousand incentives. 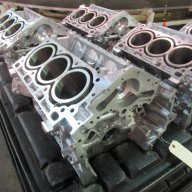 Glad to help. So seldom the memories are needed for anything.
M

Ecostang said:
Unfortunately the guy sold the car since yesterday, looks like this project isn't going to happen for me. Bummer.

Thanks again for all the responses, maybe this info will help someone else later.
Click to expand...

shoblock said:
A fresh 2016 short block will fit, and add the benefit of fine thread main bearing bolts and a stronger crank. If you get a pp block, it will have better pistons. Use all 2010 to 2012 parts above the head deck. The cams, valve covers, and logic controls were all revised for 2013, but the blocks haven't changed, except for the main bearing bolts in mid 2015.
Click to expand...

OK, I'm a noob! May I ask, what is the PP that everyone is talking about. I have not seen anything about that yet. Not to sound to Stuffy! 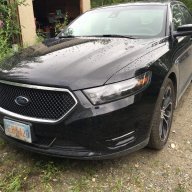 Stephen Lawrence said:
OK, I'm a noob! May I ask, what is the PP that everyone is talking about. I have not seen anything about that yet. Not to sound to Stuffy!
Click to expand...

Performance package - oil cooler, ptu cooler and able to turn advance Trac off are reasons you would want that over all the other options and 5mph higher top speed from factory oh boy

Don't forget the Aux ****** Cooler too there Fallen. That's a BIG one to have left out.

And when tuned, the Non-PP's have consistently proven faster.

And when tuned, the Non-PP's have consistently proven faster.
Click to expand...

I wasn't sure that was actually on there that is something I forgot about.

And when tuned, the Non-PP's have consistently proven faster.
Click to expand...

3.16 gear ratio as well. This means an extra shift before the 1/4 mile and the biggest factory in why the non-PP end up faster.

Yeah forgot about that one too

xFallenxCripplex said:
Yeah forgot about that one too

Sent from my Pixel 2 XL using Tapatalk
Click to expand...